Photography is Hard -(The Making of "Mom") 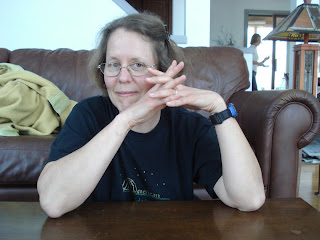 My mother is much more beautiful in real life than she is in the portrait, but as hard as it may be to believe, I started with some reference photos. 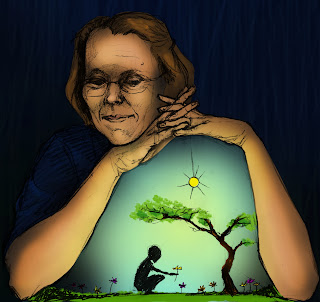 They magically turned into a color comp.
Then adorably tiny things started appearing in strange places.  For example, I found this little guy in the oven. 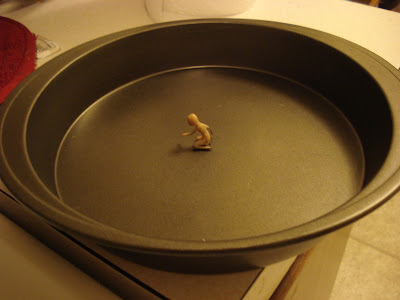 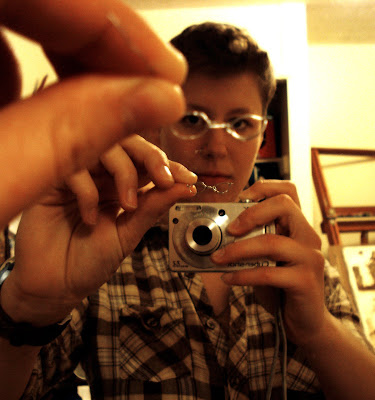 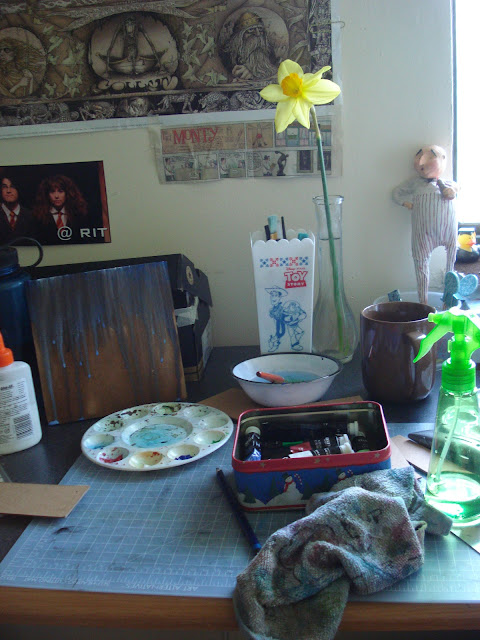 Anyway, that was all lots of fun.  Then it came time to photograph.  One thing has become very clear to me this year: I am not a photographer.  Also, it is a lot harder than I expected it to be, so kudos to those who make it their profession, like my mom and also my super-talented friend Krista.
To illustrate my point in a more exciting way I compiled a little multimedia presentation for your, but mostly, my entertainment.


Posted by ANNA OVERMOYER at 8:18 PM No comments:

The Most Influential Person

She has known me the longest, been my friend the longest, given me the most advice and we are pretty much the same person inside and out.  All things considered, and as much as I’d like to be more original, she has definitely had the most influence over my life.  She raised me, sheltering me from the cruel realities of life, allowing me to grow up in a beautiful, loving atmosphere until I was ready for reality.  Doing this has not only allowed me to see the beauty in anything, but has set an example for me that if we wish to be happy we will be, despite any hardship that threatens it.  Life is what you make it. 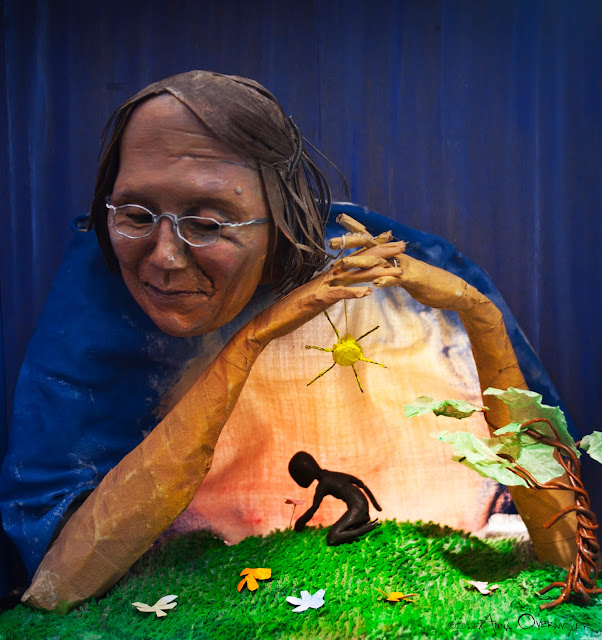 A few months ago my Cousin Dan organized, scanned, edited and uploaded a bunch of photos that my grandmother had painstakingly collected, labeled and (for lack of a better word) albumed.  They are an assortment of vintage images of my mother's family history dating back to baby pictures of my great-grandfather.
So, really old.

My watercolor professor told us our final painting was to be anything that really interested us personally.  Anything.  I was sort of lost without more direction than that.  Then Cousin sent this.  Looking through them I was really moved.  I was overcome with a sense of loss for those of them that I had known.  For those of them that I had not known, I longed for the relationships that I never had.  The photos are definitely close to my heart and personal to me.  Not to mention that I am in love with the look.  So, it appears, a perfect choice for this assignment.

It was tough, but I chose just four to arrange and I decided to focus on Grandpa's family. I Think This is What I Want to Do With My Life... Probably

A few months ago Friend convinced me that I should use a means other than Myface to share my pictures, since I am pathetically powered by positive reinforcement.  And, although I couldn't find the policy that Friend described that admitted that uploaded images automatically belonged to Myface, I decided that it was probably a good idea anyway.
So there you have it.
Without further ado:

So, I think this is what I want to do with my life:
I was recently inspired by a few professional illustrators whose works were introduced to me.  Actually it was more of a divine-intervention lightening-strike reintroduction.  Oh, and when I say that I was "inspired" I mean that I was INSANELY MIND BLOWN.  It was to the point that I was restating the title of this post in an awed voice to myself and anyone who'd listen.
I highly recommend these artists.  The first is Rednose Studio.  His work may look eerily familiar to you, as it did for me when Teacher showed it to me.  That may be because one of his pieces is a standard wallpaper for PC's.  It also was my current laptop background at the time of this magical introduction because I found it enchanting and charming. 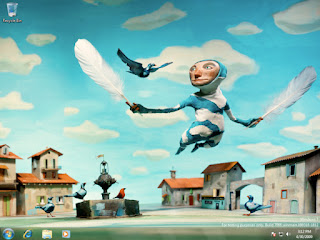 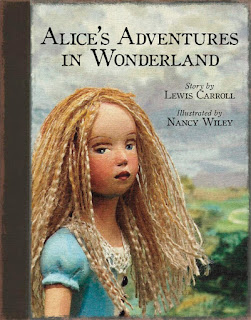 Then there was Nancy Wiley which I dug up from my memory of a few years ago when her Alice in Wonderland book came out.  I probably wouldn't have heard about it had she not been local to my area.  I remember our local library made a big deal out of it.  I admit, I didn't realize how much of big deal it was until now.

Immediately, I began dreaming up ways that I could adapt my growing portfolio to fit this sort of work.  It seemed an endless stream of possibility and excitement.  So I embarked on my first real dimensional illustration adventure, probably following a little bit too close behind Rednose Studio. It's a start anyway.

The next school assignment I got was to illustrate a "Reverso Poem" by Marilyn Singer.  I chose "Full of Beans," which is about Jack and the beanstalk.  Reading the poem down you get the giant's point of view:
"What will happen next?
Little does he know.
A giant
beanstalk is about to reach
the
clouds
through the
fragrant green air.
A boy waits in the
garden,
cow, market, beans
leading to this moment:
Time to climb."
The cool part about this kind of poem is if you read it up you get a whole different point of view, in this case it's Jack's.
After much sketching and reviewing, my class and I decided on this idea: 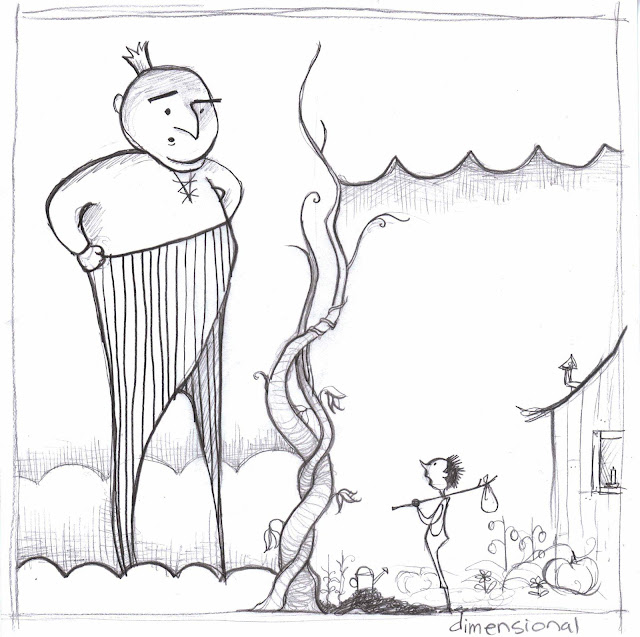 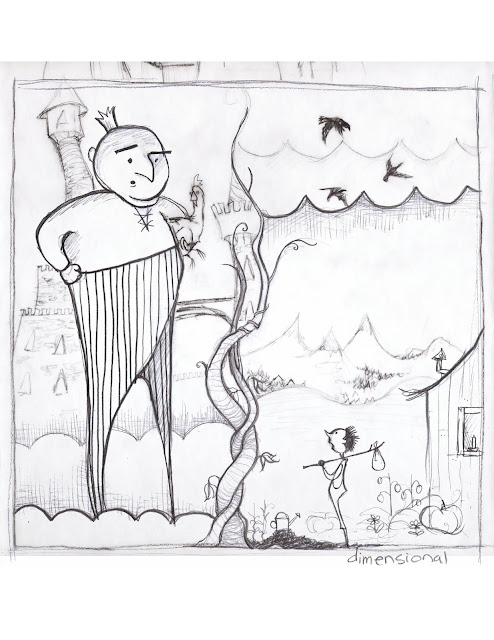 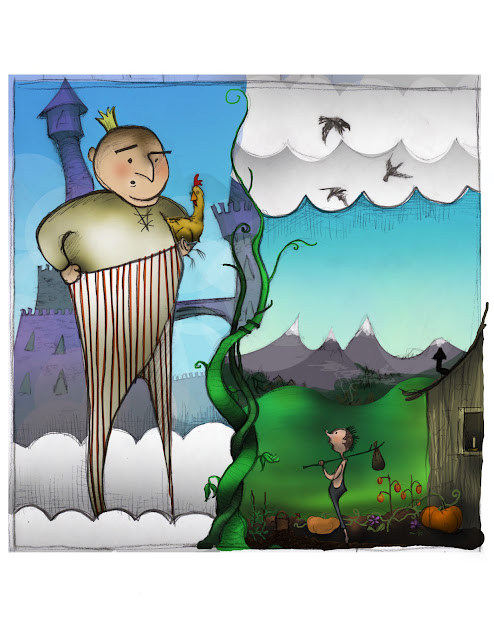 And then came the really fun part. 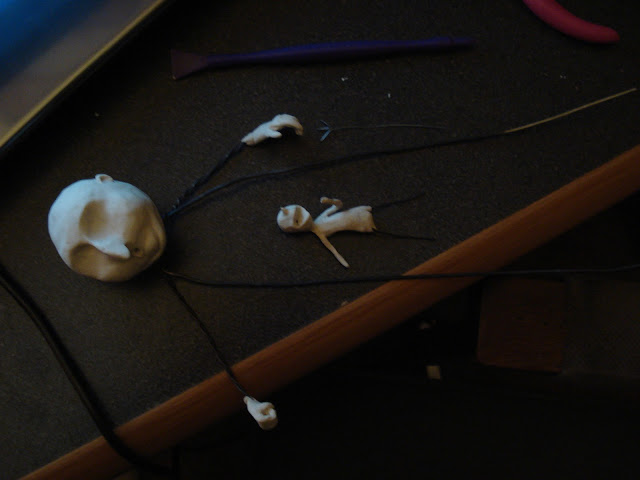 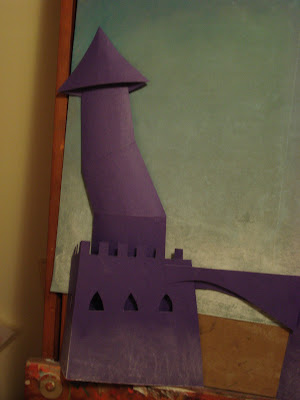 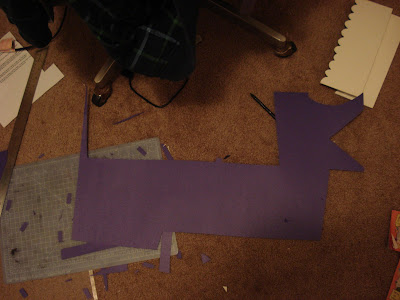 Does anyone else see a wiener dog or is it just me? 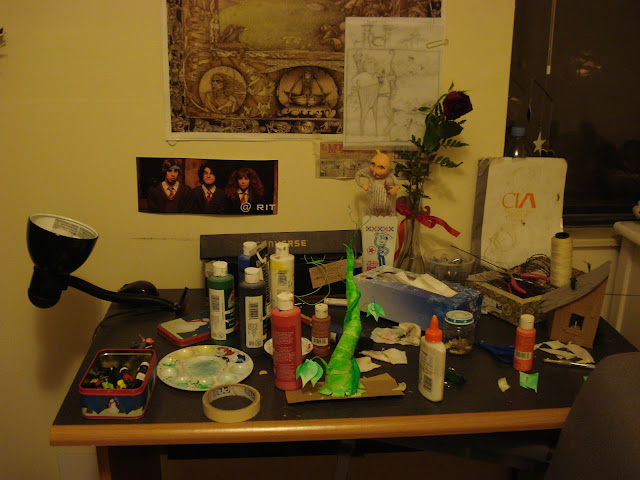 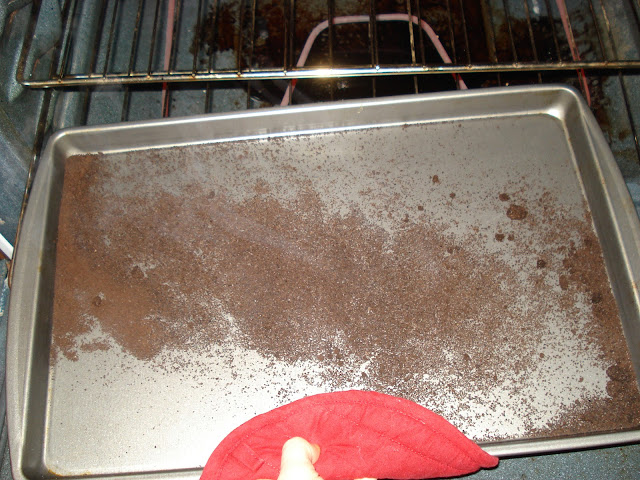 For some reason I deemed it necessary to bake used coffee grounds. 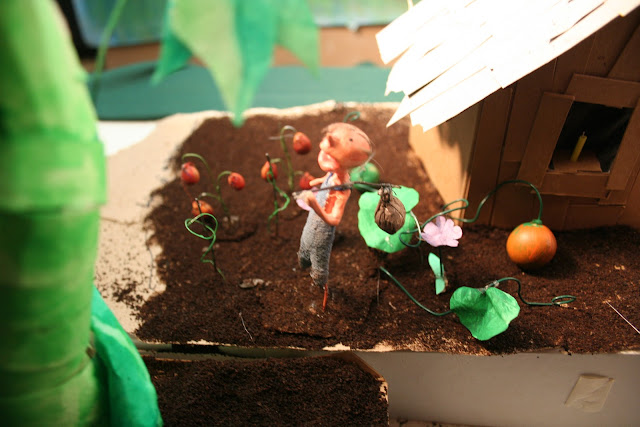 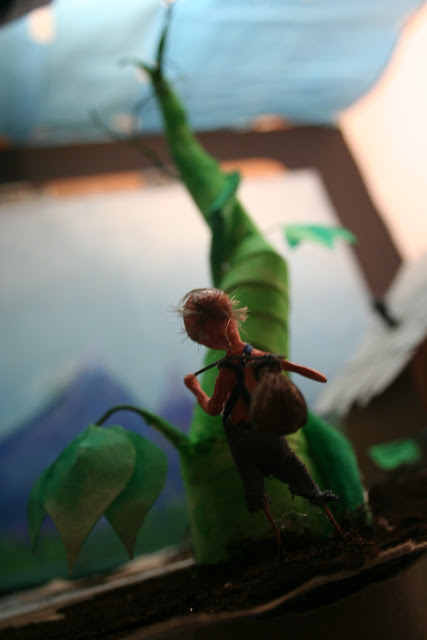 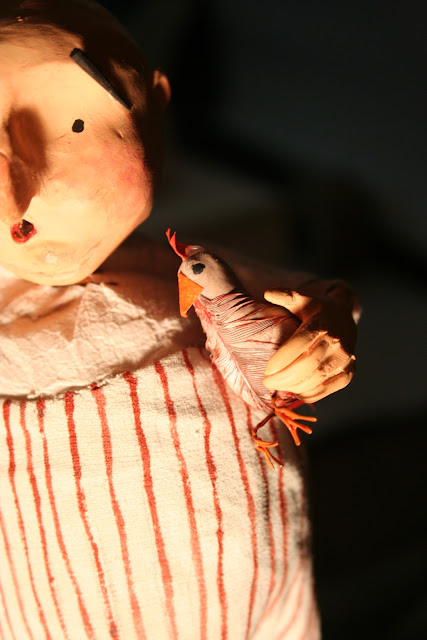 After I was all done making the tiny things it was time to set up my tiny little photography studio, aka. the underside of my desk with paper taped to it, a desk lamp and a borrowed camera. 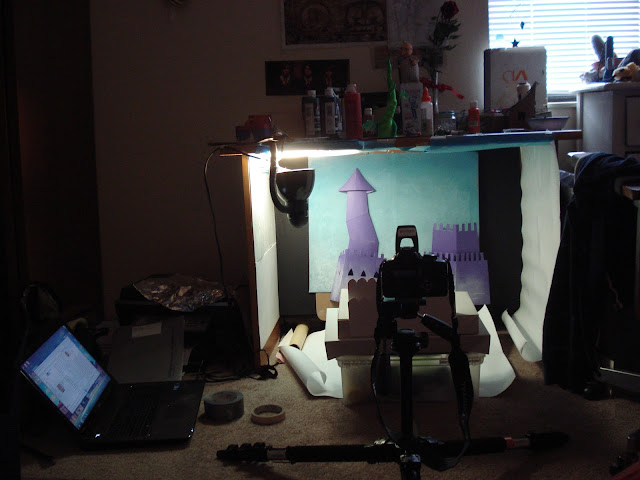 The Giant shoot proved very successful.  Unfortunately, the Jack shoot did not turn out being so simple.  I got very frustrated and tried so many different combinations of lighting techniques with my extremely primitive and limited light sources.
At one point I was so desperate I tried using my little flashlight covered in aluminum foil and was quite amused with the alien-abduction effect that it had going for it.
Eventually, after some digital editing, I had my final product. 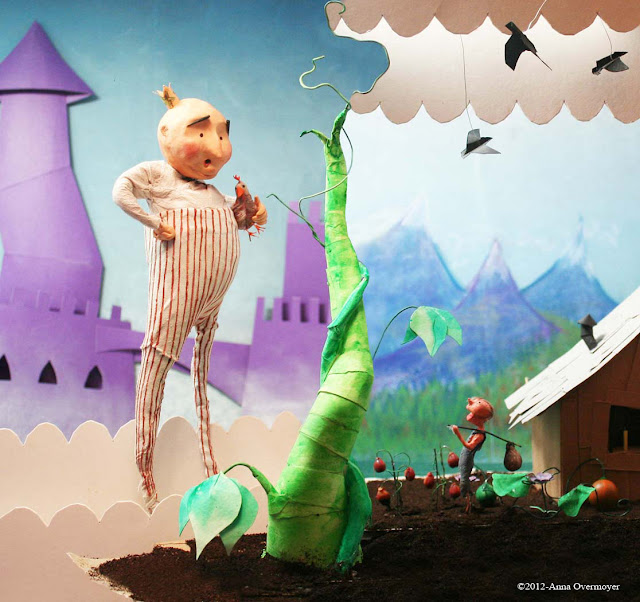 Posted by ANNA OVERMOYER at 5:30 PM No comments: